CRISTIANO RONALDO could return to Sporting Lisbon and would be the main attraction in an all-time line-up of stars to have played for the club.

Ronaldo, 36, is reportedly considering a return to his boyhood side when his Juventus contract ends in 2022 – in a blow to fellow old clubs Manchester United and Real Madrid who have also been linked. 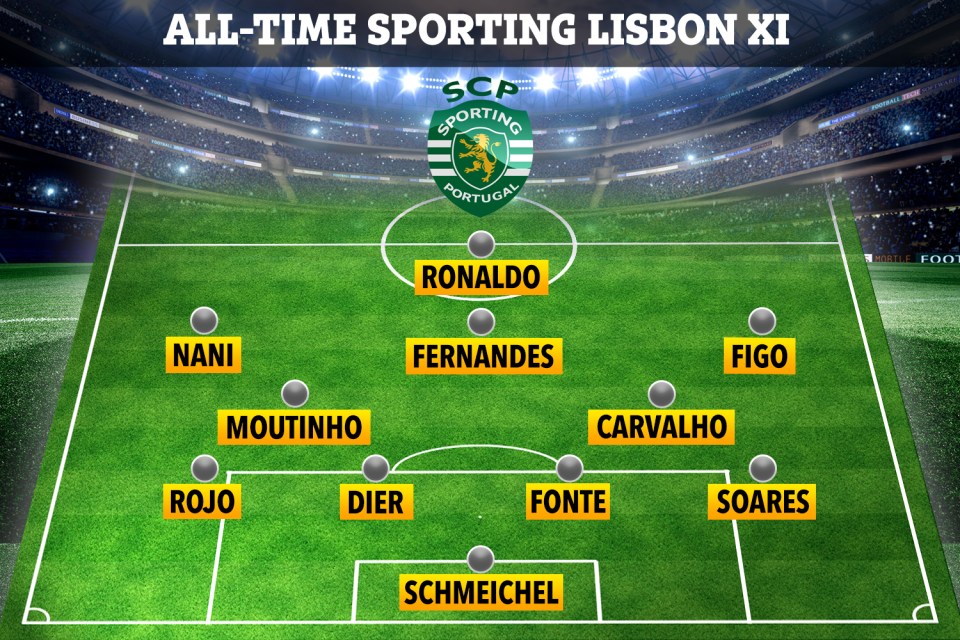 Ronaldo is the biggest name to have come through the ranks at Sporting and the club’s academy is even named after him.

But there is no shortage of talent to have excelled in the Portuguese capital.

Ronaldo joined the club as a 12-year-old but only played one senior season before arriving at Old Trafford in 2003.

He would lead the line in a best-ever Sporting side with United’s Bruno Fernandes playing as a No10 behind him.

The midfielder has been a revelation for the Red Devils since arriving in January 2020 and was even named the club’s player of the year last season despite rocking up halfway through the campaign.

Before he was Ole Gunnar Solskjaer‘s main man, Fernandes scored 63 goals and notched 52 assists in 137 games for Sporting.

El Clasico legend Luis Figo came through the ranks at Sporting and made 11 appearances before moving to Barcelona in 1995.

The legendary winger was capped 127 times by Portugal and also starred for Inter Milan and Real Madrid.

He is joined on the flanks by ex-United ace Nani who scored 31 goals in 131 appearances across three spells at the club and now plays for Orlando City in the US.

Moutinho was the club’s holding midfielder for five years between 2005 to 2010 and was also part of the Portugal side that won Euro 2016.

Carvalho is another academy product and he went on to make 192 appearances in the green and white shirt before swapping leagues, but not colours, to join Real Betis in 2018.

The back four all have Premier League experience with Boca Juniors’ Marcos Rojo only officially leaving United in February.

At right-back is Arsenal’s Cedric Soares who came through the Sporting set-up before joining Southampton in 2015.

England and Spurs star Eric Dier partners another former Saints man in Jose Fonte in the heart of defence.

Dier grew up in Portugal after his family moved to the country because his mum was running the hospitality at Euro 2004 and he stayed in the Sporting academy when they returned to the UK without him.

Peter Schmeichel is not known for his stint at the club but the Danish shot-stopper spent two years in Portugal after leaving United in 1999.