CHELSEA players have reportedly said their goodbyes to Marcos Alonso ahead of his move to Barcelona.

The 31-year-old left-back has been linked with a move away from Stamford Bridge all summer.

But that speculation increased further following the signing of Brighton star Marc Cucurella.

Thomas Tuchel now has both Cucurella and Ben Chilwell to choose from at left-back – leaving Alonso out in the cold.

And according to The Mail, the Spaniard has carried out his farewells to staff at Chelsea‘s Cobham training ground as he bids to seal a transfer this weekend.

Alonso has won the Premier League, FA Cup, Champions League and Europa League during a successful six-year stint with the Blues. 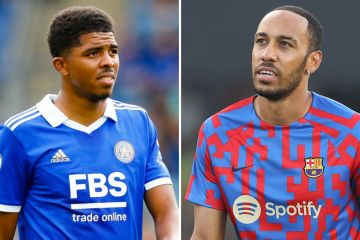 But now his days as a Chelsea player are numbered as Barcelona close in on his signature.

90min have reported that the Catalan giants are “confident” of reaching an agreement for the defender.

That is despite news on Friday that LaLiga have denied them registering five new players until they raise more funds.

In order to do so, Barca will need to sell players such as Frenkie de Jong – who has been heavily linked with Manchester United.

Meanwhile, Alonso was thought to be heading to Barcelona along with Chelsea captain Cesar Azpilicueta.

But the Blues skipper completed a U-turn earlier this week when he signed a new two-year deal to remain at Stamford Bridge.

Antonio Rudiger and Andreas Christensen left for free in the summer following the expiration of their contracts.

Only Kalidou Koulibaly from Napoli has been brought in as a replacement after the club missed out on Jules Kounde.