Emma Raducanu has ‘too much pressure on her’ ahead of Wimbledon, warns world No3 Paula Badosa

SPANISH tennis star Paula Badosa has urged people to not put pressure on Emma Raducanu ahead of Wimbledon.

Badosa, the world No3, has backed Raducanu to bounce back from poor form following her sensational US Open triumph last year but stresses she needs time to learn.

Speaking just one week before the start of Wimbledon, Badosa said: “Her [Raducanu’s] situation is very tough and she already did amazing things in this sport at a very young age.

“I think most of the people are tough on her but on the other side maybe I can understand because press is press. Still, it puts so much pressure on her.

“She is a teenager still with so much to learn.

“She needs time and I think she needs more experience on tour and she will get it but I think people have to stop putting all this pressure on her and expectations. 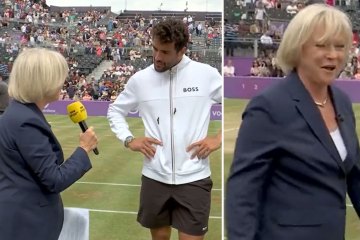 “What she did is play very, very well at one Grand Slam and she won it, so you can see how good she is but you cannot expect her to win every match and tournament because that is impossible.

“She needs time and she will get it because she has a lot of talent.”

Raducanu is in a race to be fit for SW19 after withdrawing from her match in Nottingham due to an injury.

The 19-year-old burst onto the scene nearly a year ago when she made the last 16 of Wimbledon in her first attempt.

Most read in Tennis

NAT TO BE DENIED

Eugenie Bouchard pulls out of Wimbledon over ranking points debacle

She then travelled to New York for the US Open coming through qualifying to win her first Grand Slam title.

The Londoner was the first qualifier to win a major in the Open Era and the first British woman to win a Grand Slam event since Virginia Wade in 1977.

Raducanu became the world No11 but in the two majors since, the Australian and French Open, she lost both times in the second round.

Injuries have been a constant problem for her on this year’s WTA Tour and she has also rotated coaches.