FORMER Chelsea star Lucas Piazon dislocated his shoulder and was shown a red card after helping his new club win the Battle of Brazil.

The winger spent nine seasons with the Blues, but made just three senior appearances.

Piazon was loaned out to Reading, Fulham and seven other clubs before joining Portuguese side Braga last year.

The 28-year-old Brazilian is currently on loan to home-country club Botafogo.

Piazon starred in the Rio outfit’s 3-2 comeback win at Internacional on Sunday.

But he became one of four players red-carded after triggering an on-pitch brawl in added time, during which he suffered a dislocated shoulder, in footage shown by A BOLA. 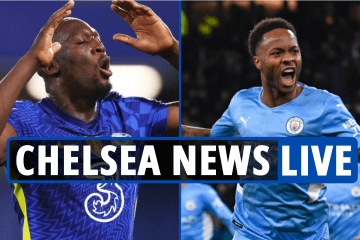 Piazon later wrote on Instagram: “We are a team of warriors, and we will fight to the end.

“Thanks for your messages of support and concern. My shoulder has now been put back into place.

“I’ll have it cared for and treated so I am ready for the next game.

“We still have many battles ahead of us, and we will always win them together as a team.”

Piazon scored five goals in 27 Reading appearances during the 2015-16 season.

He then spent two years at Fulham, helping them into the Premier League via the playoffs in 2018.