FANS were not liking Sky Sports’ new-look scoreboard for the 2022-2023 season.

The TV channel unveiled their new design during the Premier League curtain-raiser between Crystal Palace and Arsenal at Selhurst Park.

The new graphic doesn’t include any letters, instead it only shows the clubs’ badges, the scoreline and the time.

And it didn’t go down well with the fans as they flooded Twitter to voice their disapproval.

One suporter tweeted: “Okay now show us the real scoreboard @SkySports that is awful.

Another posted: “Not into that new scoreboard at all. Bring back the letters.” 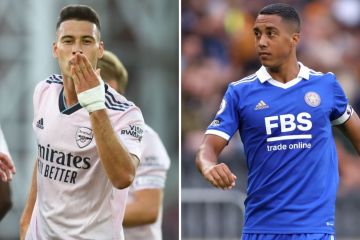 This fan said: “Sky sports new scoreboard, in the bin you go.”

Arsenal became the first team to score this season after just 20 minutes.

The Gunners opened the scoring against Palace through Gabriel Martinelli with summer signing Oleksandr Zinchenko getting the assist.

And an own goal from Marc Guehi made the game safe as Mikel Arteta’s men ran out 2-0 winners.