FLOYD MAYWEATHER and Manny Pacquiao renewed their rivalry with several verbal jabs at a press conference in Japan.

The former rivals went face-to-face on Saturday ahead of Mayweather’s clash with Japanese MMA star Mikuru Asakura at RIZIN 38 on Sunday morning.

Mayweather and Pacquiao, 45 and 43, embraced before the presser got underway – but it didn’t take long for them to take sly digs at one another.

Former eight-weight world champion Pacquaio, who trained with Asakura, said: “I’m here to support my boxer who is going to be fighting tomorrow – Asakura.”

Mayweather, who got the better of the recently-retired Pacquiao in their ‘Fight of the Century’ seven years ago, replied: “There’s no blueprint on how to beat Floyd Mayweather.

“And he can tell you that in itself. When we talk about Hall of Famers, he’s a Hall of Famer. But nobody has the remedy to beat Floyd Mayweather. 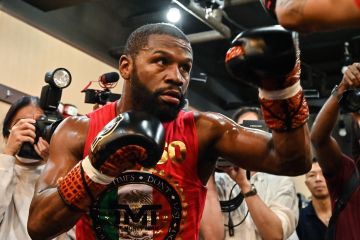 Win a Rolex Starbucks Submariner or £16,000 cash from just 89p with The Sun

“Don’t let them trick you into getting your a** whopped again.”

Pacquiao refused to take the bait, although he did make a quip about his old rival’s age, saying: “He’s older than me. I’m still young.”

The pride of the Philippines added: “What I’ve done in boxing, it’s one of a kind.

“[Winning titles] in eight different weight divisions is not that easy.

“I’m not trying to boast about what I’ve accomplished in life, but I’m just saying to repeat that because [you] might forget that.

“The best fighter in the world has humility.”

Mayweather then told Pacquiao: “I’m not here to talk about your personal life.

“[But] when we talk about what’s going on in that squared circle, I’m the best.

Pacquiao suffered a unanimous decision defeat to Mayweather in their multi-million-pound showdown in May 2015.

Pacman went on to fight a further seven times, winning the WBO and WBA welterweight titles, before hanging up his gloves last September.

Money, however, has taken part in multiple exhibition bouts – including an eight-rounder with YouTuber Logan Paul last June.