The Red Devils kick off their campaign at home to Brighton on Sunday in what will be Erik ten Hag‘s first game in charge.

But Neville, who won eight Prem titles with Man Utd, is not of the belief that his former side will make the top four this season.

Speaking on Sky Sports, he said: “I don’t think United with their current squad will finish fourth,” before he then predicted a sixth place finish.

He then added the caveat: “But if they bring [Frenkie] De Jong and a striker in it’s a different story.”

Barcelona midfielder De Jong has been linked with a move to Old Trafford all summer but a deal is still yet to materialise.

United have looked an improved side in pre-season with just one defeat from six friendly matches.

However, it remains to be seen whether they can hit the ground running in competitive action.

And Neville is well aware how tough a home clash with Brighton will be.

“I don’t know what will happen Sunday,” the former England right-back said.

“I liked what I saw pre-season, but Brighton at Old Trafford will be tough.”

Brighton thumped United 4-0 at the Amex Stadium towards the end of the 2021/22 campaign as interim boss Ralf Rangnick’s stint at the club continued to unravel.

But since then the Seagulls have lost midfielder Yves Bissouma to Tottenham and more recently left-back Marc Cucurella to Chelsea. 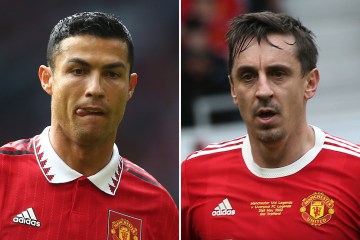 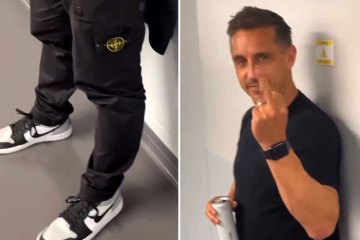 Meanwhile, it remains to be seen whether Cristiano Ronaldo will start the match.

The Portuguese superstar has made it clear his desire to leave the club this summer and has taken part in very little of Ten Hag’s pre-season preparations.

However, Anthony Martial has been ruled out of the season opener through injury and that could mean United are forced into bringing Ronaldo back despite the ongoing speculation surrounding his future.