NO sooner had we caught our breath from a thrilling Premier League finale than Liverpool and Manchester City were at it again – this time in the transfer window.

Pep Guardiola‘s side fought from 2-0 down to Aston Villa on the final day of the 2021-22 season to win 3-2 after a late surge to leave Jurgen Klopp‘s Reds heartbroken. 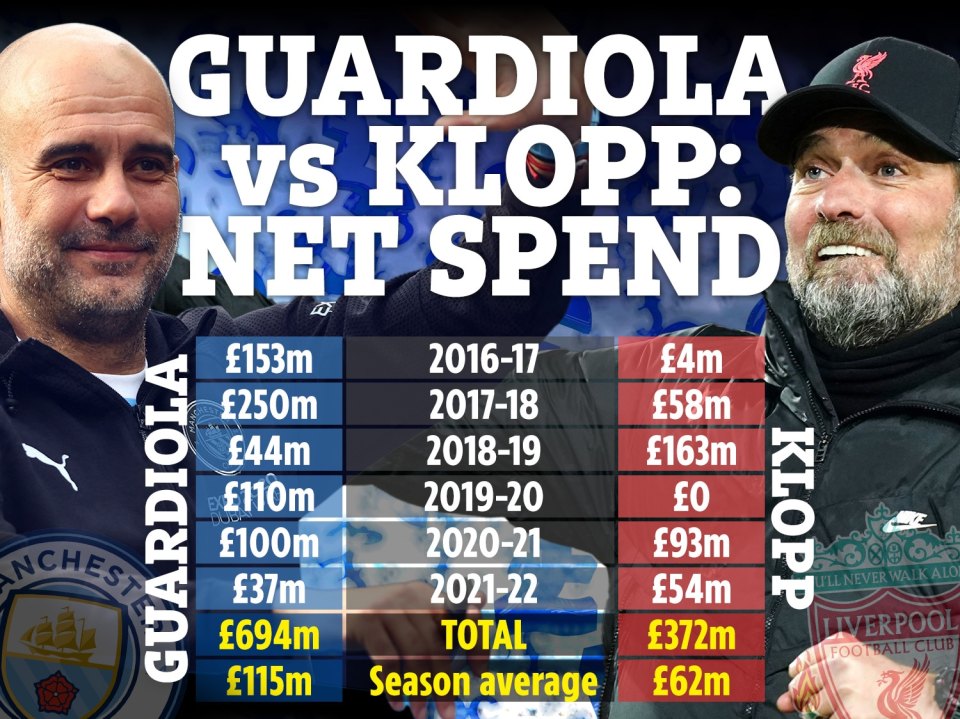 Not for the first time, City pipped Liverpool to the title by a single point, despite the Reds earning well over 90 points.

But both teams know they must keep improving if they are to keep pushing each other to the limit.

And both bosses reacted with a massive signing apiece.

Man City landed Erling Haaland in a £51m deal – with a further £42m to be paid in agents’ fees – while Liverpool splashed a club record £85m on Darwin Nunez.

Neither side has been shy in splashing the cash in recent seasons.

City have been one of the wealthiest clubs on the planet ever since their 2008 takeover while the Reds have been more shrewd with their spending.

Liverpool are famous for their outrageous net spend, frequently spending piles of cash on top talent – but regularly cashing in from mega-money sales.

For example, Liverpool pocketed £145m for Philippe Coutinho in January 2018 and reinvested that money in Alisson and Virgil van Dijk, two key figures in the club’s recent Premier League and Champions League successes.

And the stats make it crystal clear… even when it comes to net spend – money spent on players minus money earned from sales – City throw far more money on new signings than Liverpool.

Since Guardiola moved to the Etihad in 2016, Man City have a sky-high net spend of £694m on transfers.

Klopp on the other hand has a net spend of little over HALF that amount (£372m).

The Liverpool chief and his transfer team should be credited for their work since his arrival.

Simon Mignolet, Nathaniel Clyne, Alberto Moreno and Emre Can made the most appearances in Klopp’s debut season, while the bench featured the likes of Jordon Ibe, Kevin Stewart, Sheyi Ojo and Brad Smith.

Fast forward six years and Klopp boasts arguably the most-feared front-three in world football and incredible squad depth all over the pitch.

Guardiola, while undoubtedly improving his squad, inherited a world-class group of players and, despite a net spend of nearly double that of Liverpool, were just one point better off in 2020-21 – albeit a crucial one.

On top of that, Liverpool reached three cup finals – winning two of them.

So while some fans believe the Reds might have coughed up a little too much for Nunez, it’s hard to question the transfer team at Anfield.