The 36-year-old Aussie was a ring girl before becoming a pro boxer and winning the IBF bantamweight title.

The Blonde Bomber, who was also a school teacher, is currently preparing to defend her belt against compatriot Shannon O’Connell.

This week she appeared on Pub Talk, and she used the opportunity to blast back at Khabib’s controversial comments.

The now-retired undefeated UFC legend had claimed “ring girls are the most useless people in martial arts” last year.

But Bridges said: “Why are people who aren’t us, trying to take our jobs away from us? We love it, I loved being a ring girl. I don’t think it’s useless. 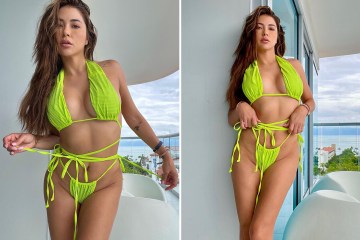 “I loved being part of the entertainment, being paid to watch those fights. You’ve got people saying it’s sexist, it’s objectifying… maybe I want to be objectified.

“Maybe I want to make money… don’t make my mind up for me. You can’t have boxing without the ring girls.”

Bridges revealed that her love for boxing developed at an early age after noticing the ring girls – and she says she had no qualms about becoming one herself.

She added: “I was a ring girl. I love combat sports, I grew up with it, so for me to be at the fights… I loved it.

“I got paid mad money, probably more than some of the fighters, to sit ringside.

“I’d be walking around in a G-string.

“They don’t do the G-strings these days but back in my heyday, that’s how we used to do it.”