ANTHONY JOSHUA deployed the “totally wrong” tactics against Oleksandr Usyk – but his new coach is confident in their devised game plan.

AJ was comfortably outclassed by Usyk, who inherited the WBA, IBF and WBO belts, last September over 12 rounds.

But he has since switched up his training team and brought in esteemed US mastermind Robert Garcia.

And the former world champion, known for his tactical awareness, admitted mistakes were made the first time around.

Garcia told iFL TV: “When you have somebody that’s a lot smaller than you and you have the weight, height, reach and power advantages then take advantage of that.

“It seemed like they had a different game plan. I wouldn’t even want to say it was a ‘game plan’, maybe it was just the wrong instructions. 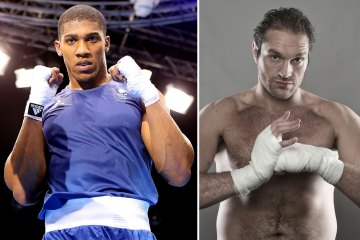 “Anthony is the type of fighter who listens to his corner so he did what he was told and it was totally wrong.”

Joshua, 32, has since left long-time coach Rob McCracken and his Team GB base in Sheffield.

He instead has promoted No2 Angel Fernandez and relocated to Loughborough, where Garcia has joined them.

AJ is set to rematch Usyk, 35, on August 20 in Saudi Arabia and is already planning to dedicate the rematch to his team.

Garcia said: “By the way it looks now, he’s listening to us.

“We have our meetings with him and he’s happy that we’re working together, he’s hungry again and he’s told us personally that he wants to do it for himself, but for us too.

“He said, ‘You are going to deserve this win and I want to do it for you’.

“That’s huge, that’s something coming from a fighter that very few think like.