JOSE MOURINHO will head to Italy to take over as Roma manager next season.

The Portuguese boss was named as new head coach of the Serie A side on Tuesday. 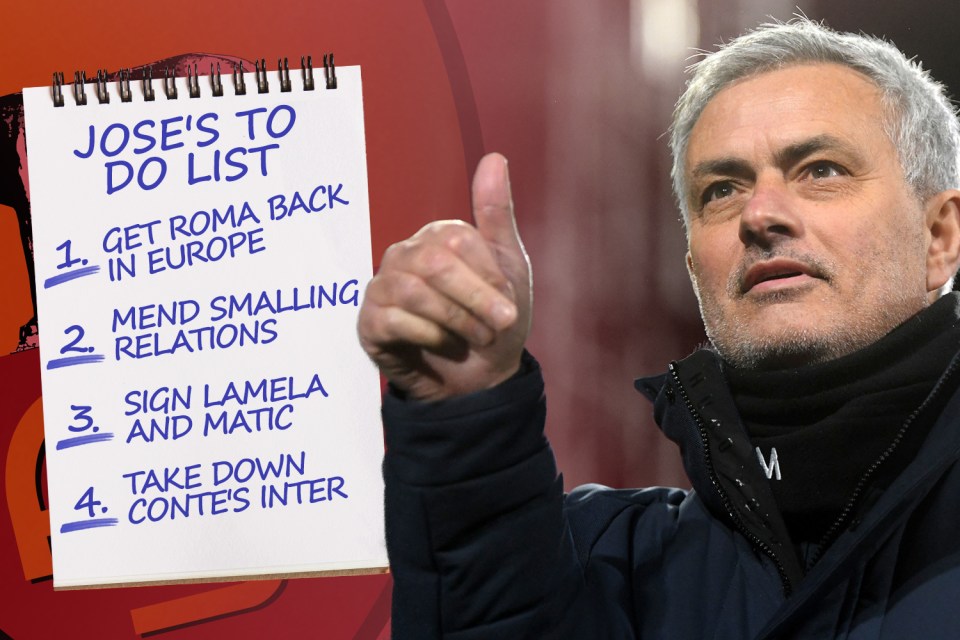 Mourinho will have plenty of work to get on with – after writing for SunSport during the Euros this summer of course.

Here, we take a look at some of the key tasks Mourinho will have to solve when he takes the helm in Italy.

Roma are seventh in Serie A and cannot finish in the top four.

And they’ll need an absolute miracle against Manchester United in the Europa League semi-final second leg this week to come from 6-2 behind.

Mourinho’s first task will be to get this proud club back into the Champions League.

They were semi-finalists just three years ago when they were beaten by Liverpool but it’s been downhill ever since.

The new Roma manager will have to build bridges with Chris Smalling after their spell at Manchester United.

Mourinho questioned Smalling’s professionalism and desire and even made a joke about his feet, saying “we’re for sure not playing out from the back”.

He also had an indifferent relationship with Henrikh Mkhitaryan at Old Trafford.

Both Smalling and Mkhitaryan have rediscovered themselves in Roma and now face the prospect of working with their former boss again.

Roma will need a fresh injection of talent if they’re to compete at the top of Serie A again.

Erik Lamela has been linked with a Tottenham exit and got on well under Mourinho at Spurs.

A reunion at Roma – with Lamela returning to the club where he enjoyed arguably the best season of his career – could work for all parties.

Talking of reunions, Mourinho just loves Nemanja Matic and the Serb is struggling for playing time at Manchester United.

Erik Lamela has been linked with a Spurs exit, and signing for Roma would be an interesting move[/caption] Jose Mourinho could also reunite with Nemanja Matic in the middle of the park[/caption]

Mourinho will have to deal with his former club Inter Milan being domestic champions when he joins Roma.

It’s fair to say there are plenty of familiar characters in this particular Mourinho storyline.

That will surely only make it sweeter for him if he’s able to take Roma back to the top of the Italian game.