ROYAL Ascot might have one of the strictest dress codes in world racing – but some celebs seemed determined to push it to the limit.

Lady Victoria Hervey and Helen Skelton were among the stars showing up in eye-popping outfits on Ladies’ Day today.

Lady Victoria Hervey, who appeared on the original series of Love Island, went braless with a wide-brimmed hat, jacket – and a see-through top.

The 45-year-old aristocrat and former ‘It’ girl posed for photographs in the very revealing combo.

The star, who recently split form husband Richie Myler, looked like she was having a great time posing with a glass of fizz. 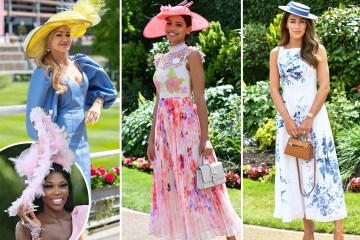 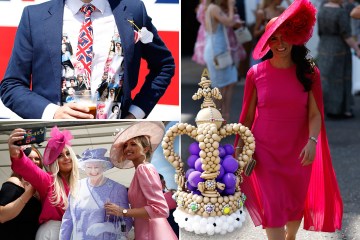 FIT FOR A QUEEN

She wrote: “Day for it

thanks for having us.”

Helen added a hashtag for Ascot‘s Royal Enclosure – where the sort of halter-neck top she was wearing isn’t allowed.

The area – originally reserved for family, guests and the household of King George III – is the most exclusive part of the course.

A style guide, published on Ascot’s website, warns: “Ladies are kindly reminded that formal daywear is a requirement in the Royal Enclosure, defined as follows:

“Dresses and skirts should be of modest length defined as falling just above the knee or longer. Dresses and tops should have straps of one inch or greater.

“Strapless, off the shoulder, halter neck and spaghetti straps are not permitted. Dresses and tops with sheer straps and sleeves are also not permitted.”

Racegoers have been arriving at the Berkshire racecourse dressed to the nines in flamboyant hats and stylish dresses all day.

This Morning presenter Josie Gibson was there alongside co-star Georgia ‘Toff’ Toffolo, who wore a black and gold outfit.

We pay for your stories!

Do you have a story for The Sun Showbiz team?

We pay for videos too. Click here to upload yours.