NORWICH’S defence were court out.

And he was Coleen through. It’s… Jamie Vardy.

The striker would have been forgiven for having other things on his mind at the moment.

But it really didn’t need Wagatha Christie to work out who was going to be on the case of the Canaries.

Vardy’s other half Rebekah is currently making headlines of her own in her very public libel dispute with Coleen Rooney.

But on the pitch, no-one can pull apart a carefully constructed defence quite like Leicester’s Vardy who fulfilled his brief pretty much to perfection after the break. 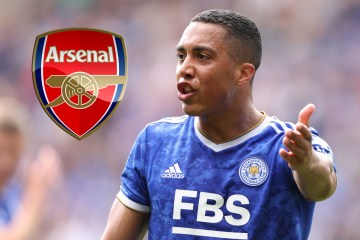 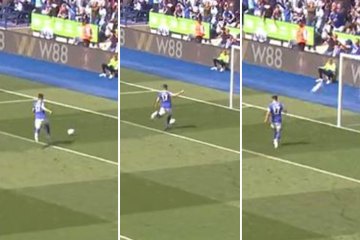 He scored twice to sentence Norwich to their latest defeat.

And as James Maddison added a third, the Canaries collapse was complete as the Canaries conceded a league-high 78 goals to beat their previous worst Premier League record of 77 in 2004-05.

This fixture was originally scheduled for New Year’s Day – but was postponed when Norwich’s squad was hit by coronavirus and injuries.

However it sure felt like January 1 as both teams came into this end-of-season affair nursing the mother of all hangovers.

Brendan Rodgers’ Leicester were still aching from their European semi-final exit at the hands of Jose Mourinho’s Roma.

Meanwhile, Norwich continued to suffer from the shakes after their fourth relegation in four Premier League seasons was confirmed last week.

Until Vardy presented his case, Rodgers was on the ropes as Angus Gunn put up the shutters with a brilliant first-half display of goalkeeping his famous dad Bryan would have been proud of.

He kept the Foxes at bay after 11 minutes when he beat away Maddison’s fiercely hit shot from 25 yards.

However Vardy was on it like a flash, drilling it into the turf and was ready to celebrate when Gunn stretched out his trailing arm to sensationally get a glove to keep the ball out again.

Moments later he was at it again, this time pushing another netbound Maddison effort round his post.

At the other end Kasper Schmeichel was doing his best to outdo him as he raced from his line to palm the ball away from Tony Springett’s feet.

Teemu Pukki moved in for the kill but couldn’t believe it when Schmeichel recovered to block his effort too.

Schmeichel then stuck out a foot to keep out a Gianoulis low shot, before Gunn did exactly the same to deny Ademola Lookman with a similarly instinctive save.

Norwich haven’t had much to cheer about this season and it was easy to see why on the stroke of half-time.

Springett sprung Pukki who took advantage of a Daniel Amartey slip to bear down on goal.

But the Finn also lost his footing as he shot and though he beat Schmeichel, the ball bounced off the base of his post to safety.

Once again Leicester and Rodgers were booed off at the break as they faced the real danger of clocking up their eighth game on the spin without a win, for the first time in five years as Claudio Ranieri fell from grace.

Not even Claude Puel managed that, as the Foxes said ‘Au Revoir,’ to the Frenchman after his seventh failure to win and brought in Rodgers.

At that point the only bells Rodgers could hear were alarm bells!

And that was the cue for Vardy to ride to the rescue as he scored for the first since March 1, nine minutes into the second half.

Harvey Barnes ran at the Norwich defence before releasing Vardy whose shot spun into the air with a helpful deflection off Grant Hanley to loop over Gunn.

Eight minutes later he doubled Leicester’s lead timing his diagonal run to perfection as he took Barnes’ pass in his stride before slamming the ball high beyond Gunn.

He was inches away from completing his hat-trick, shooting narrowly wide before Maddison wrapped up the win with a third.

The midfielder rifled a shot through a ruck of Norwich bodies after Gunn could only parry out Kiernan Dewsbury-Hall’s fierce shot.