IT is in touching distance now — just as it was exactly this time a decade ago.

There will be a reunion tomorrow in Manchester city centre to commemorate that first Premier League win for City. That Sergio Aguero moment.

A statue is being unveiled in honour of the club’s greatest-ever goalscorer at the Etihad in the afternoon.

He will be there for that and in the Depot Mayfield for the evening do.

The architect Roberto Mancini will be there, too, the ex-manager reunited with all the players from that unforgettable May afternoon — when City upstaged their cross-town rivals United, who thought they already had two hands on the Prem trophy.

City have both hands hovering on the handles now. 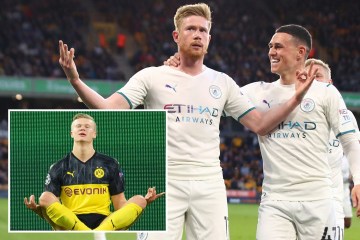 MY NAME IS ERL 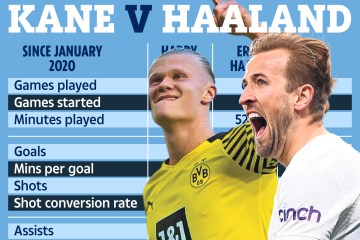 It should be straightforward, with a maximum of four points needed from Sunday’s trip to West Ham and a home closer with Aston Villa on May 22.

But what that run-in a decade ago and the final day told us is that being so close to something so special can still do funny things. Take your eye off the ball and, bang, it’s gone.

City do not have to look back ten years to know the dangers of that. Try less than a fortnight ago.

Two goals to the good and coasting in their pursuit of a second successive Champions League final, then the meltdown in Madrid. They thought they were there and just lost it.

Ruthless serial winners Manchester United were guilty of that back in 2011-12. An eight-point lead with six games to go, even United lost focus.

By the final game in May 2012 — at the Etihad against relegation-threatened QPR — all City had to do was win.

So given they avoid defeat at the Hammers it is “only” Aston Villa at home in the last game.

Though Villa’s narrow Tuesday defeat at home suggested they are anything but on the beach.

What if on the final day Liverpool go ahead early at Anfield against this same Wolves side who succumbed to Kevin De Bruyne’s brilliance last night?

That is what happened ten years ago, as United took the lead at Sunderland and tension gripped the Etihad.

Pablo Zabaleta’s opener lifted it but then City lost their heads — it needed the most remarkable bit of drama on 93 minutes 20 seconds to recover the situation.

It happens in sport when the winning line is just there.

Golfers can’t hit a ball straight, tennis players forget how to serve, Devon Loch falls when there is no fence.

And a team can collectively relax when the job appears to be done, as City did in the Bernabeu.

Even for now-seasoned title winners, with another four Prem crowns added since that first, it can unravel.

Remember there is a story about Villa boss Steven Gerrard handing City the title after he slipped with the trophy in his sights as a player.

Aguero’s day ten years ago should be celebrated but, ahead of the final two games, it will also serve as a warning.