The Red Devils chief sent an internal email to colleagues after he was filmed branding last season a “f***ing nightmare” in a Cheshire boozer.

Arnold, 51, also admitted United have “f***ing burned through cash” in the meeting with 12 fed-up supporters at The Boot Inn, Willington.

And he doubled down on his statements in the internal memo.

Arnold confirmed the group were planning to protest outside his home and that he chose to head them off in his local village pub – intending to provide United’s side of the story.

The exec went on to assure staff his message to fans was no different to ones he has been peddling internally. 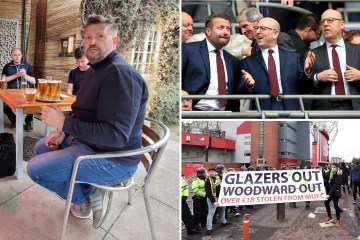 Arnold laid out four key points, only this time with far fewer expletives.

He reiterated on-field achievement is the club’s No 1 priority which relies on strong staff performance combined with a united and supportive fanbase.

He said the board were unhappy with last season’s showing and assured staff action is being taken to improve results.

And Arnold reminded staff of the board’s continued investment and their plan to keep spending – but in a more effective way thanks to a new structure.

Finally he reassured workers of the intention to maintain the club’s strong financial position in order to invest in facilities for the benefit of supporters, players and staff.

Arnold made headlines on Saturday night In a stunning face-to-face meeting with anti-Glazer protesters in a Cheshire pub – ahead of the group heading to his HOUSE – with the United CEO gave a damning verdict on predecessor Ed Woodward’s reign.

He revealed the club has wasted £1BILLION and cannot upgrade their stadium or training ground without new investment.

A group of 12 angry fans were gathered in a boozer and planning to protest at Arnold’s house over a lack of new signings.

Arnold, who replaced Woodward on February 1, got wind of the meeting and headed to the Boot Inn pub in Willington, Cheshire, to buy drinks for fans in an attempt to placate them.

Last year was a f***ing nightmare. I was hating every minute of it.

But in a brutal assessment of the state of the club, he was filmed on Twitter saying: “We’ve f***ing burned through cash. We spent a billion pounds on players, we spent more than anyone in Europe.

“I am not thrilled with where we are, it doesn’t sit easy and we’ve got to get this sorted.

“You can’t go to our training ground and go ‘show me where that billion pounds is here’.

“We’ve blown through an enormous amount of money.

“Last year was a f***ing nightmare. I was hating every minute of it.”

“If you are that stupid and that gormless and that naive and that wet behind the ears that you’re going to sit there and think that what you’re saying isn’t going to find its way into the public domain, even by a regurgitation of someone verbally giving back what you’ve said or someone recording it, what the hell is the matter with you?”