SEVEN days into the transfer window and next season’s title race has already been decided.

Yes, folks, it’s going to be Manchester City versus Liverpool all over again.

That’s the grim reality following the signings of Erling Haaland and Darwin Nunez this week.

Because two teams which finished at least 18 points clear of the chasing pack last season are now going to be even stronger.

Which means the Premier League is in danger of morphing into LaLiga or, God forbid, the Scottish Premiership, where two superpowers totally dominate and the rest are just competing for the minor places. 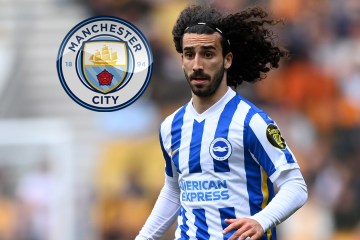 And even though his wages and various signing-on fees will push their total outlay to somewhere in the region of £180m over the next five years, it’s not as if the owners are short of a bob or two.

Even more disturbing for all the rivals of a team who scored 150 goals last season is the news that Haaland will be joined at the Etihad by Julian Alvarez, the Argentine international already earning comparisons to countryman Sergio Aguero.

Liverpool’s response to City’s statement of intent has been to fork out a potential £85.3m club-record fee for Benfica’s prolific Darwin Nunez.

So even if Sadio Mane leaves Anfield this summer — and that is by no means certain — Jurgen Klopp will still have Nunez, Mo Salah, Luis Diaz, Diogo Jota and Roberto Firmino to choose from up front.

I hate being the world's sexiest footballer... I get bombarded with X-rated pics

Manchester United did their best to persuade Nunez to snub the Kop’s offer in favour of a move to Old Trafford.

But that was never going to happen in a million years and now United are staggering from one target to the next like a drunk in a disco.

And you get the impression United are now the absolute last option for any ambitious footballer seeking a new opportunity this summer.

Chelsea are still trying to pick up the pieces after losing their oligarch owner . . . and most of their defence.

And now their £97.5m record signing Romelu Lukaku is kicking off again and desperately trying to force his way out of Stamford Bridge.

Arsenal, as always, have been linked with every other player in Europe but have only managed to complete the signing of unknown Brazilian  Marquinhos for £3m so far.

And although there is still plenty of time to strengthen their paper-thin squad over the next 11 weeks, you know they won’t be signing anyone to worry Klopp or Pep Guardiola.

Which just leaves Tottenham, who have broken the habits of a lifetime to get their transfer business done early and now look a good bet to finish as the best of the rest next season.

It is one of football’s most cherished traditions for Spurs chairman Daniel Levy to haggle over every deal until the last minute of the window.

But faced with the threat of losing the demanding Antonio Conte, he has been panicked into paying whatever is required without cutting corners.

So now they have Cristian Romero and Dejan Kulusevski on permanent deals, Ivan Perisic and Fraser Forster already in the bag and Yves Bissouma set to put pen to paper.

Like Haaland, Alvarez and Nunez, it means the new arrivals will be available for the start of pre-season training, acquainted with their team-mates and settled into the area by the time of their opening game on August 6.

It probably won’t be enough to smash the City-Liverpool duopoly but at least Spurs are making a fist of it.

ENGLAND scored a barely credible 838 runs to win the Second Test against the Kiwis, probably more than they have managed in some entire recent series.

But the standard of catching at Trent Bridge was absolutely appalling.

The ball was deposited into the crowd on 24 occasions by Jonny Bairstow, Ben Stokes, Daryl Mitchell and even Joe Root.

Yet not one stuck in the hands of the boozed-up butterfingers ducking for cover from the  aerial bombardment.

The closest anyone came to holding a catch was when a Mitchell missile landed in one punter’s pint.

Fielding practice is definitely the order of the day for Headingley next week.

A CASE OF CROSSED ‘GUIRES

POOR old Harry Maguire seems to be getting it in the neck for everything these days.

The Manchester United centre-half was booed ON to the pitch when he arrived as a late England sub on Tuesday night.

They had probably been following the BBC website, which accused him of “shocking defending” for Hungary’s first goal… 70 minutes before he came off the bench.

ON THE RIGHT ROAD

A REAL heart-stopping moment when an invitation to attend a Jamal Khashoggi event at a Saudi embassy dropped into my inbox.

Thankfully, it turned out to be the naming of a road in Washington, DC by protest group Democracy for the Arab World Now.

Rather than the opportunity to get up close and personal with Crown Prince Bonesaw and his henchmen.