BRENDON McCULLUM looks set to be named England’s new Test coach by the end of the week.

McCullum is the favourite after a round of interviews led by the ECB’s chief Rob Key at the start of the week.

Brendon McCullum was a key player for New Zealand over his 14-year international career.[/caption]

Yesterday moves were under way to have Key’s preferred nominee ratified by the ECB board, whose approval is likely to be swift.

This only leaves contractual details and any work permit arrangements to be settled.

If all goes smoothly an announcement could come today, but more time could be required to iron out the logistics. 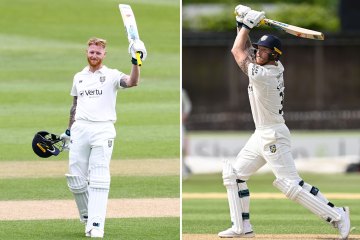 But Key had previously indicated there could be an element of flexibility around IPL employment given his decision to split the red and white-ball positions.

Indian Express newspaper reports that McCullum has already told KKR he will be leaving his post to take up the reins with England.

McCullum has never coached a first-class side before, let alone a Test nation, but has a reputation as an astute thinker and inspirational skipper.

He made 101 Test appearances during a 14-year international career with New Zealand, as well as 331 in limited-overs cricket.

MOST READ IN CRICKET

Who is Graham Thorpe's wife?

All the TV info and fixtures for England's 2022 schedule

And he was an active player on the Twenty20 circuit as recently as 2019.

He is also a close pal of England’s white-ball captain Eoin Morgan — who chose him as master of ceremonies at his wedding.

Both Morgan and newly-installed Test captain Ben Stokes have been canvassed for their opinions on the candidates and both are likely to have given enthusiastic support to McCullum.

Previous frontrunner for the Test job Gary Kirsten could be a contender for limited-overs position.

However, the ECB are likely to leave that decision until next week.