RAHEEM STERLING is at a crossroads in his career.

For a man who spends most of his working life chopping and changing direction in an instant on a football pitch, normally it wouldn’t present too much of a problem.

But there cannot be any wrong moves over the next few weeks, as one of the players who polarises opinion more than most when he’s in an England shirt ponders whether to stay at Manchester City or go elsewhere.

At the moment, the most likely destination should he reject a new contract at City is Chelsea.

There is growing momentum in the belief that Sterling is the No 1 transfer target for Blues boss Thomas Tuchel this summer.

With no denials on or off the record from either side of the fence, we can safely assume the story has genuine legs. 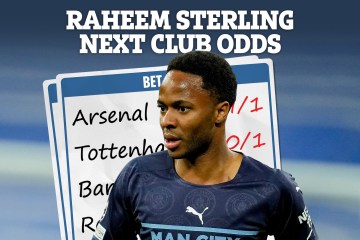 For Sterling it might sound like a dream come true getting more game time – and probably more money – playing for the colourful and honest German, who has done wonders for Chelsea’s unpalatable reputation as brassy big spenders with little class.

But going ‘home’ to London where he grew up would also mean playing every other week at the ground where he became a victim of vile abuse in December 2018.

Back then, 60-year-old Colin Wing and his pals chose to spit vitriol right in the face of Sterling as he collected the ball by the corner flag.

And this was during a 2-0 win for Chelsea, so God knows what would have happened if they had been losing.

Wing later apologised and insisted he called one of England’s best players a “Manc c***” not a “black c***” as was suggested.
Not sure that makes it OK but there you go.

Chelsea, to their credit, acted swiftly and with great principle, banning Wing for life and his friends temporarily for using ‘foul and abusive language’.

Sterling and other ethnic minority players suffer racist abuse at grounds all over the world.

Chelsea fans are not the only suspects — but it is Chelsea being linked with his signature for now.

In later interviews, mentally scarred Sterling says that particularly unsavoury episode at Stamford Bridge prompted him to take up arms against the bigots with his ‘Time For Change’ anti-racism campaign.

He has since been awarded an MBE for efforts to combat the issue and for promoting equality.

All of which presents him with a huge dilemma if ‘interest’ from  Chelsea morphs into a concrete offer to move clubs for the start of  next season.

If Sterling were to accept the chance to join Chelsea, is he  compromising his morals for the sake of more first-team football and a few extra quid?

Would leaving City, where he is much-loved by everyone, to serve a crowd where he has been verbally abused and regularly accused of ‘running like a girl’ by thousands in the stands undo all his work?

Or would taking the plunge and moving to Stamford Bridge count as an impressive act of forgiveness on his part?

A sign that Sterling is actually showing greater strength than any narrow-minded yob by putting aside previous experience to walk into the lion’s den and cow his tormentors?

After all, anyone who previously bought a ticket for Stamford Bridge and fancied having a pop at Sterling would have to think twice about it if he is wearing a Chelsea shirt.

It’s a question only Sterling knows the answer to.

But if he decides to say goodbye to City and sign for Chelsea, it will take the football racism debate to a whole new level.

GOT an email a week ago on behalf of Amazon requesting permission to use recent footage of me asking questions in a press conference for a documentary series.

It’s called All Or  Nothing: Arsenal.

But after watching the way that Mikel Arteta’s Gunners belly-flopped at the end of last season, surely everyone knows the answer to that already?

You can save yourself a few hard-earned quid on subscription fees there. Don’t thank me.