RICKY HATTON’S comeback fight against Marco Antonio Barrera is OFF.

The boxing legend, 43, was set to return to the ring for an eight-round exhibition fight at the AO Arena Manchester on July 2.

Hatton had shed a staggering two-stone for the fight and even sparred with son Campbell to prepare.

But now the fight has been postponed, with plans for it to be rescheduled.

The clash has been canned after Hughie Fury – headlining a Sky Sports show at the same Manchester venue on the same night – fell ill, with his fight against Michael Hunter called off.

The younger cousin of Tyson Fury had hoped a win would catapult him towards a title fight with WBA heavyweight champion Daniel Dubois. 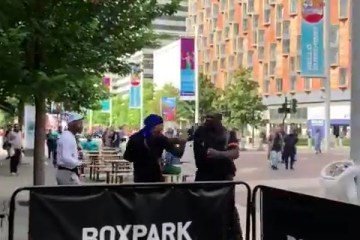 Hatton, fighting under a different promotion to Hughie, will now see his exhibition fight pushed back with the entire evening’s card axed.

The Hitman, who famously ballooned up between fights, had left no stone unturned in preparation for his showdown with Mexican great Barrera.

He even proudly revealed he can now “hide behind a lamppost” after a sensational two-stone weight loss in the last seven weeks – with pal Tyson Fury piling on the praise.

Following his incredibly transformation, Ricky even sparred with pro son Campbell, 21, before sharing his pride on Twitter.

Captioning two pictures of the pair in the ring together, the Hitman wrote: “Very emotional day for me as a father today.

“Couldn’t be prouder of @campbellhatton anyway as everyone knows…

“Had many proud times over the years… that was up there.”

Campbell added: “Few rounds with the old fella this afternoon.

“Not a backwards step taken by either of us…

“He’s done mint getting himself in great shape and back fit and healthy.

“You definitely never lose it…”