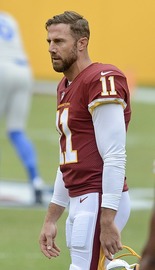 Alexander Douglas Smith is an American football quarterback for the Washington Football Team of the National Football League. He played college football for the Utah Utes, where he was... Wikipedia