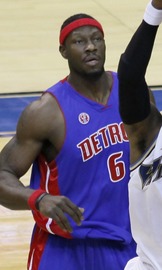 Ben Cameron Wallace is an American former professional basketball player who is a minority owner and president of basketball operations of the Grand Rapids Drive of the NBA G... Wikipedia