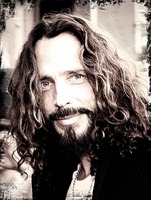 Christopher John Cornell was an American singer, songwriter, and musician best known as the lead vocalist and rhythm guitarist for the rock bands Soundgarden and Audioslave. He also had... Wikipedia