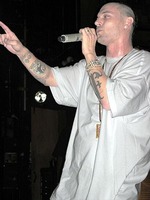 Kevin Earl Federline, often referred to as K-Fed, is an American singer and former backup dancer. He is known for his two-year marriage to American singer Britney Spears and... Wikipedia