Duraev was stopped from going into the third round as the cageside doctor deemed his eye too closed to continue.

The Russian, 33, is likely to be handed a lengthy suspension while his injury heals.

It is not the first time Duraev has suffered a gruesome left eye injury, having suffered similar bruising last year.

But he actually beat Roman Kopylov, 31, at UFC 267 while fighting with a closed eye.

Buckley, 28, wanted a viral knockout but was ultimately happy the fight ended when it did. 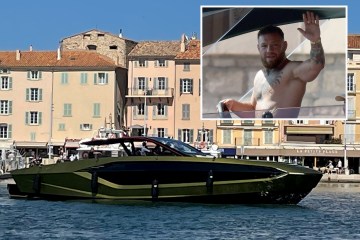 GOAT ON A BOAT

McGregor takes Dee for a spin on £2.7m Lamborghini yacht in southern France

He said at the post-fight press conference: “The doctor stoppage, it was cool. But you always want those viral knockouts and those viral moments.

“That’s my biggest thing. I’m glad the doctor stopped it for him and for his health, but I just wish he added a little bit more pressure so I could’ve turned his lights off.”

Buckley is now on a three-fight winning streak and continues to build towards a UFC title shot.

His win over Duraev was among his most dominant performances but is just what the American expected.

GOAT ON A BOAT

McGregor takes Dee for a spin on £2.7m Lamborghini yacht in southern France

CON WITH THE WIND

Buckley added: “I knew this fight was going to be exactly what it was. I knew what he was capable of.

“The one thing that he was good at was holding people down, and I made sure this whole camp to practice if I got taken down that I was getting back up.

“So we worked a lot of scenarios on the ground and just worked on being patient, working my hips to the cage, and stand back up, and just throw them hands.”