ENGLAND’S Commonwealth Games hockey match against Canada was marred by a vicious scrap.

And one player was sent off after “CHOKING” a rival during a fit of rage.

The brutal scenes occurred in Thursday’s battle between England and Canada.

The hosts were leading the match 4-1 when the fight broke out.

An England player appeared to tackle a Canadian rival with his hockey stick before receiving a yellow card.

But a melee swiftly ensued between England’s Chris Griffiths and Canada’s Balraj Panesar in the aftermath.

Sign up to our new weekly betting newsletter for tips, free bets and price boosts 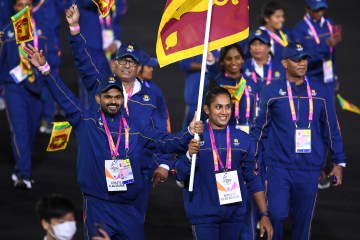 Griffiths appeared to pull on Panesar’s stick, sending his opponent into a blind rage.

Panesar lashed out by grabbing Griffith’s shirt as the two men butted heads.

However, Panesar took things up a notch when he then took hold of Griffith’s neck, appearing to choke the England ace momentarily.

Panesar appeared to choke Griffiths at one point[/caption]

Most read in Athletics