ALEJANDRO GARNACHO celebrated exactly like the star he intends to be.

Twice there was the ‘Siu’ celebration, the goalscoring jump of joy that is the trademark of one Cristiano Ronaldo.

— utdreport Academy (@utdreportAcad) May 11, 2022
Alejandro Garnacho grabbed his chance in the limelight by the scruff of the neck[/caption]

The 17-year-old prodigy delivered the first rendition with the same style that marked the 77th-minute penalty that helped Manchester United to a 3-1 FA Youth Cup final triumph over Nottingham Forest.

Winning the spot-kick, Garnacho looked to have been brought down on the edge of the Forest box by Zach Abbott who was shown a yellow.

Yet referee Josh Smith pointed to the spot and United’s prodigy did not falter before producing that dazzling Ryan Giggs-style finale that capped it all for the class of 2022.

Then there was the dazzling run and strike that secured victory four minutes into time added on. 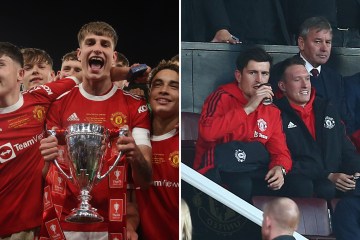 And in scoring this time he looked for all the world like a certain Giggs and United fans still thrill to the memory of hat became of him and so many of Sir Alex Ferguson’s Class of 92.

The way things are likely to go for Garnacho in the years to come he might want to come up with a celebration all of his own.

For when Erik ten Hag settles down to watch the recording of the Little Devils’ triumph he will surely be certain that if Garnacho is good enough for Argentina then he’s good enough for him.

The Dutchman missed the clash with Nottingham Forest.

Old Trafford’s manager-in-waiting was still in Holland, guiding his Ajax side to a third Eredivisie title with a 5-0 win over Heerenven.

Yet by the time he switches jobs at the start of next month he will surely be convinced that Garnacho has it within him to live up to the hype that already surrounds him.

For the Spanish-born youngster, quite simply, has star quality.

Ask any of the 67,482 crowd that turned up a £1-a-head to form a record attendance for a youth cup final.

For he began wowing them with a brilliant right-footed curler four minutes from the interval that flew a foot or two wide.

Just before there as an equally impressive turn and shot that skimmed just beyond goalkeeper Aaron Bott’s left hand upright.

That came moments after he howled in agony after a tough challenge by right back Joshua Powell.

The kid might want to get used to that kind of treatment.

For Ten Hag, who will arrive looking to build a new team from the debris left by Ralf Rangnick and Ole Gunnar Solskjaer, is liable to see him as a major part of his long-term plan right from the start.

Already he has had eight minutes of first-team time against Chelsea this season, while Argentina called him into their squad too.

He trained with the great Lionel Messi and it is not only around Old Trafford but in Buenos Aires that they have begun to think that a new superstar is in the making.

Certainly when it came time for him to stand up and be counted in front of a record – shattering attendance for a youth cup final he relished the moment.

The sides were level thanks Rhys Bennett’s early opener for United before Josh Brown equalised just before the interval.

But Garnacho’s second-half double sent the near 70,000 crowd happy.